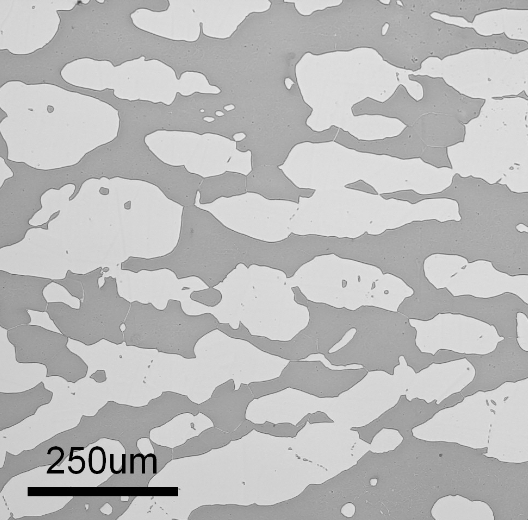 Production of pump casings made of a type of super duplex stainless steel
Due to soaring crude oil prices in recent years, it has become necessary to redevelop low-grade oil fields and gas fields, development of which had previously been difficult. This required high pressure pumps; however, conventional products made by casting had limitations in terms of strength. Oilrig components, which were previously made using castings, now had to be made using steel forgings, which are superior in strength. Super duplex stainless steels, containing a high level of nitrogen, are difficult to hot-work. They are also susceptible to sigma phase precipitation during processing, and therefore were difficult to forge. Based on many years of accumulated experience, we at Pacific Steel Mfg., attempted to make thick-walled pump casings by forging, and succeeded in making a product compliant with the ASTM-F55 specification as a result of much trial and error. 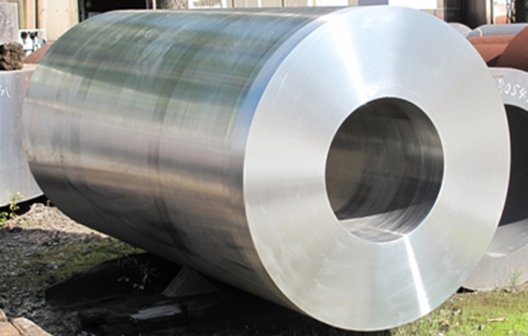 Integrated production to respond to specific needs
As Pacific Steel Mfg. handles the entire process from melting and refining to machining, it is possible to make improvements based on customer requests. We have conducted research on optimal composition and forging methods for various purposes. Our mission is to exceed our customers’ needs and expectations, leveraging the technology and experience accumulated over 75 years since our foundation, through experiments, simulations, and other approaches using the latest equipment.

Forging TechnologyWhat is forging?
Iron - a Symbol of Civilization
It is said that the use of iron began around the 20th century BCE. In those days, because processing of iron was difficult, most of the metals that were processed were gold, silver, and copper. It is said, however, that the Hittites, who thrived from around the 16th century BCE, had excellent iron processing skills and were able to use strong weapons made of iron, enabling them to conquer the Mesopotamia region.
Since then, iron, as a symbol of civilization, has been used in a wide variety of forms, such as for farm implements and household tools in addition to weapons. After the Industrial Revolution, iron and steel became more and more important - so much so that there was a saying that the iron and steel industry 'makes' a country. Production of iron and steel has dramatically increased, and they now are indispensable materials in our lives. 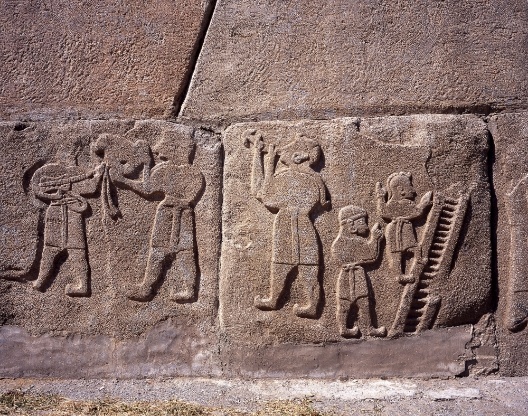 What is forging?
As implied by the saying “Strike while the iron is hot,” it has long been known that iron becomes stronger by striking it. In Japan, the work of heating and striking iron has traditionally been known as kaji (blacksmithing) or hizukuri (smith forging). It is what we now call “forging.” Heating, hammering, and applying pressure to steel removes gas pockets, structural deviations, and impurities in the metal, and homogenizes its structure, making the steel hard and strong. Forged steel products are strong and durable, and they have been used for farm implements, kitchen knives, and other everyday items since time immemorial.
Free forging and die forging
Forging is divided into two types: free forging, where dies are not used, and die forging, where dies are used. Free forging refers to a method of forging where the heated iron/steel is anchored and then formed by hammering, pressing, or other methods. Free forging can flexibly form the shape of each product, and is suited to making large components or for diversified small-quantity production. On the other hand, in die forging, dies are prepared in advance, and refined iron is placed in the dies and formed by compression. While it takes time and effort to make the dies, it is possible to mass produce products with accurate dimensions; therefore, this forging method is suited for the production of industrial product components. 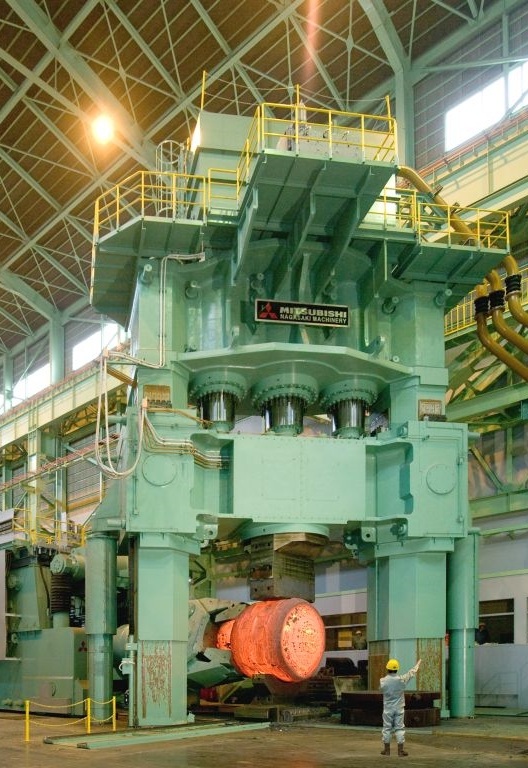